How to Take Full Backup of Android Phone (Root & No-Root)

If you are one of those Android users who like to try something new on their phones like flashing Firmware, Custom Roms, custom Recoveries and other modifications. Then you may have come up with a term Nandroid Backup which is recommended before any Modification. Here you will know How to Backup Android Phone completely in both case Root & No-Root. 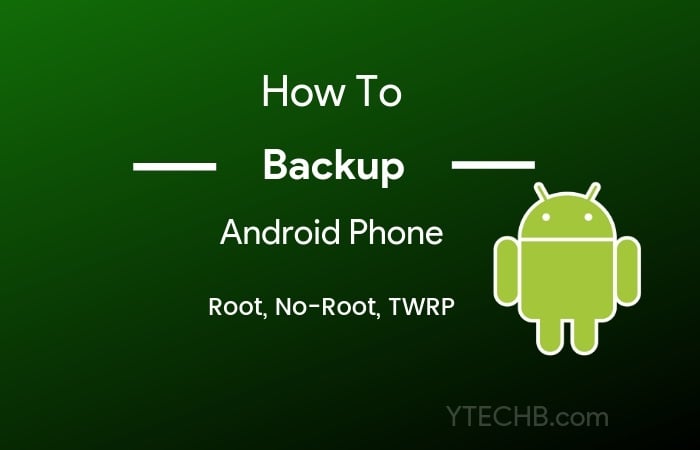 There are more than one ways to backup Android Phone either it is rooted or not. Backing up full data on an Android device is simpler if any custom Recovery is installed and rooted. It is important to take backups frequently to avoid any data loss. Sometimes even a single App can cause bootloop or not rebooting problems. In this case, only the backup will help to recover data.

How to Backup Android Phone

Android users have options to backup important data and also full backup containing the firmware (System Image). Full backup help users to roll back to an older version of the device if there is any problem with the newer update. Backup also helps to restore data in case of soft-brick issue. I will categorize the guide in three different sections which will describe the step to take backup on Non-rooted phone, Rooted phone, and Phone with custom Recovery.

Note: After taking backup make sure to transfer the backup file to PC. So that you can recover the backup data whenever you want.

How to Backup Non-Rooted Android Phones

There are data like Apps, Contacts, Call History, and Internal data that are important to take backup. You can take backup of your non-rooted phones with some third party apps and of course the Google Account.

You May Also Like: How to Restore WhatsApp Chats from Google Drive

In Google Backup option there is an option to backup messages, but that doesn’t work. I tried many times and failed all the times. So I tried other third party apps and luckily found one which is best for message backup. So to backup messages on your phone go through the following instructions:

If you don’t want to download all of your Apps again then you can backup Apps using some third party Apps. In this way, you don’t need Internet data to restore backups. I will recommend to use Backup & Restore App. This app only backup Apps (APK) not the data so if you want to backup Apps data then use the next method.

It’s not easy to backup Apps data without Root But with the help of an app called Helium which was previously known as Carbon is making it possible. So big thanks to the Helium developers for developing the App. I will always recommend this App for backup to no-root Android phones. Although you will not be able to create backups of some Apps like WhatsApp, and some other system Apps. Creating backups using Helium is not easy, so follow the steps carefully.

5) Backup Media and Other files

To backup files like Videos, Document, Pictures, Compressed files etc, I will recommend transferring these files on PC using USB Cable. Although you have always an alternative option to back up these data which Cloud backup. For cloud backup, you can use Google Drive, OneDrive or any other cloud service.

For Photos & Videos, Google Photo is one of the best options which automatically creates backup of all the Media files. But remember restoring from Google Photos requires an Internet connection which will cost carrier data.

How to Backup Rooted Android Phones

If you have a rooted Android Phone then the backup of Android phones become easier. You can backup almost everything in Rooted phones. There are some well-known Apps which only works on rooted phones and used for backup purpose. Here I will use Titanium backup, which is the best backup App for rooted phones from my perspective. Let’s see how to use Titanium App to backup Android Phone.

So that’s all you have to do to backup Apps with data in Android phones with root privilege.

You can completely backup Android phone which is called Nandroid Backup which includes partition backup. For Nandroid Backup, you don’t need any specific recovery. But in this guide I will use the TWRP recovery, you can follow the same procedure for any other custom Recovery like CWM, TWRP, OrangeFOX etc. In this backup you don’t need to transfer media files separately, all these files will be backed up within the Nandroid Backup. Simply go through with the following steps for Nandroid backup of Android phone.

So there you have it the brief guide on Backup Android Phone completely whether it is rooted or not. This way you will not lose your data. And also it will save your time from recovering everything one by one. If you have any queries then make sure to comment and we will reply as soon as possible.

Mi Flash Pro is a group of multiple tools or we can say it is a complete package for Xiaomi phones. The tool lets...
Read more
Best

The latest iPhone, iPhone 11 lineup bears a bunch of stock wallpapers both the light and dark versions. If you are fatigued using these...
Read more
Downloads

Samsung Galaxy A30, followed by the Galaxy A30s are one of the best selling budget smartphones of last year. Both phones are jam-packed with...
Read more

Mi Flash Pro is a group of multiple tools or we can say it is a complete package for Xiaomi phones. The tool lets...
Read more
News

Android 10 hits Moto G7 Plus in Brazil as Stable Update

Moto G7 Plus is the Motorola's first mid-range G-series phone to get the taste of Android 10 update. Earlier this month, Motorola pushed a...
Read more
How To

iOS 13 and iPadOS 13 are the latest OS for iPhone and iPads respectively and packs with similar specs. Apple device is popular not...
Read more
Android

Dark Mode is one of the most anticipated features of last year, almost every known social media platform has a dark theme option. While...
Read more
Android