John Wu, the Magisk developer, has recently released the new version of Magisk and Magisk Manager with new features. The Magisk v20.1 and Magisk Manager v7.4 come with major improvements. Samsung phones are too complicated to root because of dual-layer security along with A/B partition, but with this update, the rooting will be much easier. Here you can Download Magisk 20.1 Zip and Magisk Manager 7.4 APK for Android phones. 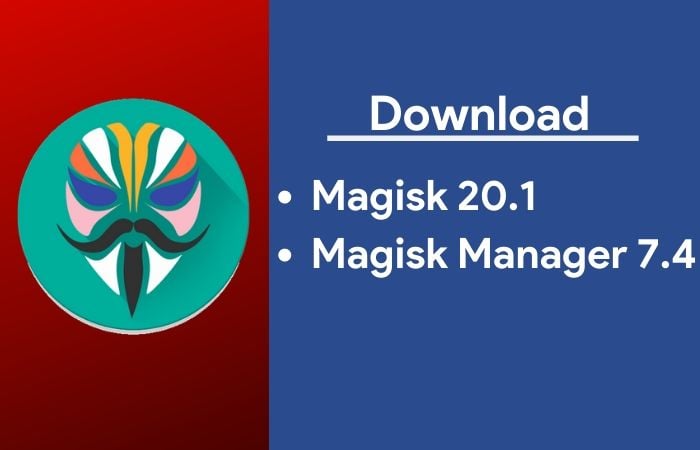 All credit goes to the developer of Magisk ‘John Wu’, also known with name topjohnwu. You can follow him on Twitter to get the latest updates related to Magisk. Magisk v20.0 was launched last month with various improvements, and john wu regularly keeps updating the app with new features. You can know more about the Magisk 20.1 and Magisk Manager 7.4 features in the changelog section.

The new Magisk Manager 7.4 also comes with new features such as we can now customize the App name while hiding Magisk Manager. Along with new features, there is also a fix regarding the Fingerprint infinite loop issue. Google Pixel 4 was launched after the release of Magisk v20.0, and this version will easily root the Google Pixel 4. We have already written a guide on how to root Pixel 4 with Magisk Canary build. Check out the latest release changelog.

If you want to root your phone, then every developer and tester will suggest the Magisk tool. It is the best tool to root any Android phone systemless without interfering with the Apps that do not run the Apps on Root like banking apps. You can hide the root access from Magisk Manager for any app to which you don’t want to give root access.

Important: If Magisk and Magisk Manager are already installed on your phone, then you don’t need to download the latest version from here. You can directly use the Magisk Manager App to directly install both Magisk & Magisk Manager.

How to Install Magisk v20.1 on Android Phone

Now you have the phone with root access. Magisk now lets you efficiently use all the Apps that require root access. You can create full system backups, uninstall pre-installed system apps, and more. Now let’s see the way to install the Magisk Manager app.

How to Install Magisk Manager v7.4.0

In most cases, the Magisk Manager gets install when we install the Magisk. But if not, then follow this guide. It is compulsory to install Magisk Manager to manage and access root features.

That’s all you have to do to install Magisk and Magisk Manager on any Android phone. After installing the Magisk, you will have full root access on your phone.

So there you have it the complete guide on download Magisk 20.1 and Magisk Manager 7.4 APK. If you have any queries, do let us know in the comment section.

The OnePlus Nord is arguably one of the best mid-range smartphones, as it offers a "flagship-class" camera. OnePlus packs its Nord-series devices with a...
Read more

Realme 6i is a more affordable option as compared to its big brother Realme 6. And the quadruple-camera setup is one of the stand-out...
Read more

Moto G 5G Plus is one of the most affordable 5G smartphones available under the mid-range price segment. The device is billing with six...
Read more

TWRP Recovery is certainly the best custom Recovery for any Android phone. But you can get to experience the advanced custom recovery if it...
Read more

Download Google Camera for Samsung Galaxy A31 and A41 [GCam 7.4]

A-Series phones are one of the best selling mid-range phones by Samsung. And newly launched Galaxy A31 and A41 capture really impressive photos from...
Read more

After trailing the flagship-killer tagline behind, the company has launched its next-generation smartphones, dubbed as OnePlus 8 and OnePlus 8 Pro. The real-flagship dawns...
Read more

Samsung Galaxy S20 is by far the best camera smartphone of the year 2020. Samsung scale up the camera performance of Galaxy S20's from...
Read more

Realme is all set to bang under the very competitive mid-range price segment with its newest Realme 6 series phones. Realme 6 & Realme...
Read more

Samsung Galaxy A51 is arguably one of the best mid-range smartphones of the year 2020. The Galaxy A51 is billing with a quadruple-camera setup,...
Read more

Following the regular updates this week Apple released the iOS 13.6.1 public stable update along with iPadOS 13.6.1. Last week we were expecting the...
Read more

How To Root Sony Xperia 10 II and Unlock Bootloader

Sony released three devices in the first quarter of 2020 including the budget Xperia 10 II phones. It comes with some great specs that...
Read more

Download the Wallpapers of Microsoft Surface Duo & Neo in 4K!

In October 2019, Microsoft announced a bunch of surface devices at the event held in New York City. Not only the surface laptops but...
Read more