Samsung Galaxy A30, followed by the Galaxy A30s are one of the best selling budget smartphones of last year. Both phones are jam-packed with nice hardware. One of the main attractions of both phones is the camera. In terms of optics, the Galaxy A30s brings a triple-lens camera setup with a 25MP primary sensor, while the predecessor A30 dons a dual-lens camera setup with a 16MP main sensor. Luckily, we found a Google Camera port which works fine on both phones. Here you can Download Google Camera 6.2 for Samsung Galaxy A30 & A30s. 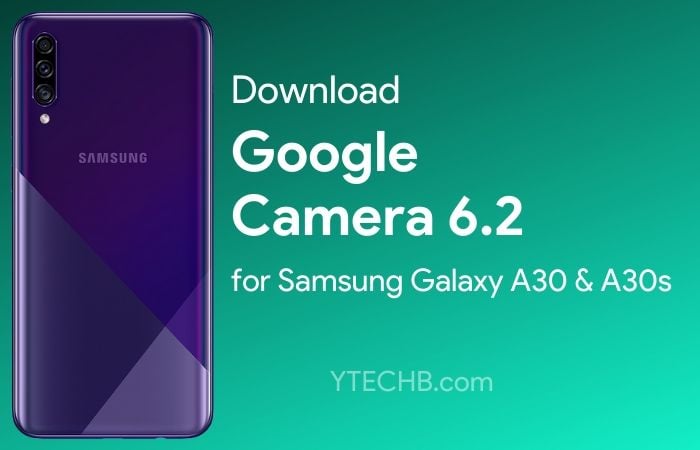 Samsung Galaxy A30 was launched last year alongside the Galaxy A50, It brings all the basic features to the default camera app, except Night Mode. While the company later push a software update which brings slow motion features and a few improvements. Talking about the Galaxy A30s, It has all the basic features and captures decent shots. But you can install the Google Camera app and capture some fantastic shots. You can also change the photo resolution in this GCam port.

Google Camera 6.2 (from Pixel 3) works fine on both the Galaxy A30 & A30s, it packs with features like Kissing detection mode and more. Talking about the legendary version – Google Camera 6.1, It brings features like night sight mode, PhotoSphere, Slow Motion, Playground (AR Stickers), RAW support, HDR+ mode, Panorama, Lens Blur, Portrait mode (with Focus Slider), Google Lens mode & few more. There are only a few GCam ports, works with Samsung’s Exynos chipset devices. Thanks to BSG and all other developers who have ported the app. Here’s the step by step guide on how to Download & Install Google Camera 6.1 for Samsung Galaxy A30 and Samsung Galaxy A30s.

Both the Galaxy A30 & A30s have Camera2 API enabled by default, but the HAL3 level is not available. It is one of the main reasons that only a few GCam ports are working on these phones. We found two different Google Camera mod ports – GCam 6.1 & GCam 6.2, and sadly, both are partially working on the Samsung Galaxy A30 and Samsung Galaxy A30s. Here are the download links.

Note: The Portrait Mode and Video recording works fine using back camera on the GCam 6.2. To use Night Sight with full compatibility, you need to enable Camera2 API and HAL3 (Level 3), by rooting the Samsung Galaxy A30 & A30s. We’ll update the article once we found the Night Sight enabled apk for Galaxy A30 & A30s.

After downloading the app, apply the below-mentioned settings, which will make the app more smooth.

How to Install Google Camera on Samsung Galaxy A30 & A30s

So, start capturing the realistic & amazing pictures with your Samsung Galaxy A30s and Galaxy A30.

Samsung has released a few Tabs this year including the flagship level Galaxy Tab S7 and S7 Plus. Both Samsung tablets come with premium...
Read more

Galaxy Note 20 Series is the latest flagship series from Samsung which packs with top-notch specs. The series is even better than the Galaxy...
Read more

Want to flash stock firmware on your Infinix phone? If yes then you need a flash tool for it. And like other brands we...
Read more

The Galaxy Note 20 series phones are one of the best camera phones of 2020. Samsung's newest flagship - the Galaxy Note...
Read more

Realme 7 and Realme 7 Pro are one of the most anticipated camera phones of the mid-range price segment. Oppo's offshoot Realme bumped up...
Read more

After trailing the flagship-killer tagline behind, the company has launched its next-generation smartphones, dubbed as OnePlus 8 and OnePlus 8 Pro. The real-flagship dawns...
Read more

Samsung Galaxy S20 is by far the best camera smartphone of the year 2020. Samsung scale up the camera performance of Galaxy S20's from...
Read more

Realme is all set to bang under the very competitive mid-range price segment with its newest Realme 6 series phones. Realme 6 & Realme...
Read more

Samsung Galaxy A51 is arguably one of the best mid-range smartphones of the year 2020. The Galaxy A51 is billing with a quadruple-camera setup,...
Read more

Realme has finally announced the second-generation of its Realme UI skin, in the form of Realme UI 2.0. Realme UI 2 is based on...
Read more

Apple released iOS 14.2 Beta 1 for Developers with a slew of UI Changes

This week has been the week for Apple as they have released many products and software updates. And the biggest highlight of...
Read more