How to Take Long Screenshot on any Android Phone

See Also: How to Take Long Screenshot on iPhone

So if you also want to capture a scrolling screenshot of any full page from browser, gallery, or any other App. Then this tutorial is for you. Nowadays some Android mobile companies provide this feature as inbuilt. But some do not. Well, It’s been 2-3 months when the first Android P Beta developer preview comes, but still Android is lagging from this useful feature. While, Google gives an update in which users can edit the screenshot taken from the Google app. If your phone does not have this feature as inbuilt then you don’t have to worry. We will share how you can capture long screenshot on any Android Phone.

How to Take Long Screenshot on Android

The only thing you will not like about this App is the screenshot taken by this app contains a small watermark of the app name. However, you can remove watermark by cropping screenshot from below. Or you can buy premium service which will allow the user to take long screenshot on Android without watermark.

Note:- This method is to take long screenshot on Android Phone. It will work with every Android phone above 4.1

Combine images feature is same as combine screenshots. There is only one difference you will find where two images join together, but it is not noticeable. By this method, You can take long screenshot on Redmi, Oppo, OnePlus, Samsung, Lava, Micromax, Xiaomi, Vivo, Honor, Asus, and more.

How to Take Long Screenshot on Xiaomi Phones

Xiaomi phones have the best custom UI called MIUI. The MIUI has options to customize Android phones and make the phone interesting. MIUI also offers better performance. They also added the long screenshot feature on their Android Phones. It is available for devices running MIUI 8 or above. So if you have a Xiaomi or Mi phone then you don’t need the App mentioned above. Check out how to take long screenshot on any Xiaomi phones. 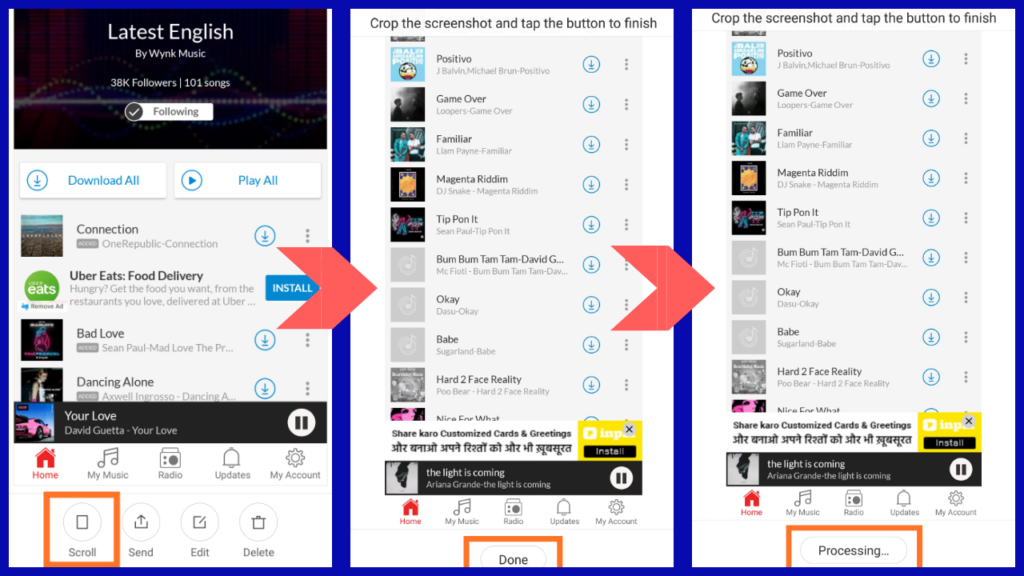 The above method is helpful if you are looking for how to take long screenshot on Redmi 4, Redmi note 5 pro, Mi a1, Redmi note 4, and other Mi devices having MIUI 8 or above.

Also read: How to Get New Google Assistant Voices on your Android

How to Take Long Screenshot on OnePlus Phones

Now you have successfully captured the long screenshot on OnePlus phones.

Samsung starts rolling the latest Android 10 based OneUI 2.0 stable update for Galaxy A10s. Recently we have seen Samsung has rolled out the...
Read more

Realme X50 Pro (5G) is one of the most anticipated smartphones of this year by Realme. And the 64-megapixel Quad Bayer camera sensor is...
Read more

The smartphone industry is booming from the past few years and the reason is simple which is the delivery of smartphones as per user's...
Read more

Magisk is the only reliable tool available right now for rooting Android phones. It makes the rooting method so much easier and it works...
Read more

Samsung Galaxy M31 might look like a tiny upgrade over the Galaxy M30s. And the camera is the major highlight of the smartphone. The...
Read more

Samsung starts rolling the latest Android 10 based OneUI 2.0 stable update for Galaxy A10s. Recently we have seen Samsung has rolled out the...
Read more

Just a week ago Apple rolled out the stable iOS 13.4 and iPadOS 13.4. And now Apple starts preparing for the next update which...
Read more