A few days ago Samsung launched the new Galaxy S series phones, Galaxy S10, S10e, and S10 Plus. All the Galaxy S10 lineup phones are one of the best phones to capture some stunning pictures of your life. Last Year, Google introduced a Night Sight mode & some other great features with the new Google Camera 6.1 APK. And The new Pixel 3 camera app is now available for the tenth-generation Samsung Galaxy S-series lineup. Thanks to the developers, who have started porting the apk for the S10 lineup. Here you can Download Google Camera 7.4 for Galaxy S10, S10e, and S10 Plus.

The Samsung Galaxy S10 Plus has a triple lens camera setup on the back and dual lens on the front. While the S10 & S10e has a single lens on the front & dual on the back to capture some decent shots. And the Pixel 3 camera app helps you in capturing some great shots in low light with night sight mode. All thanks to cstark27 (Senior Member of XDA-developers), who have ported the #GoogleCamera Mod. So, Here’s the step by step guide on how to download & install Google Camera 7.4 for Samsung Galaxy S10, S10e, and S10 Plus. 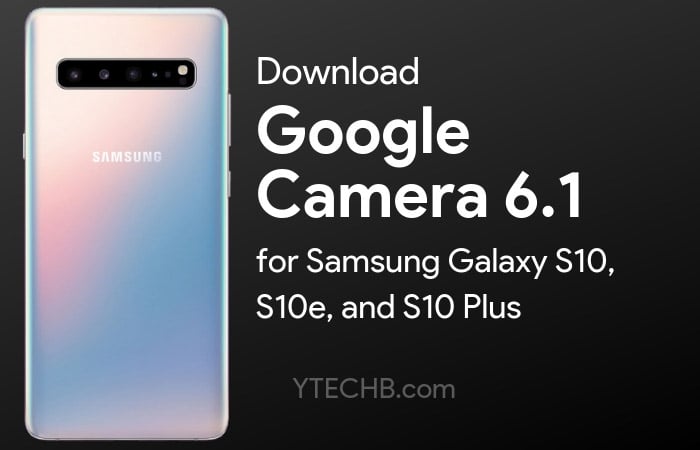 The AI & Machine learning-based new Google Camera 6.1 app, is intended to capture life’s best moments effortlessly. Night Sight is one of the best features of the Pixel 3 Camera app, once you press the shutter button, it will collect a modest amount of light in the lens which helps you in capturing realistic shots. And here you can find a detailed on Google Camera with its features & use.

The Google Camera 6.1 cstark27 mod has been ported and tested on the new Galaxy S10 lineup, and thankfully it works fine. The Galaxy S10, S10e, S10 Plus, and S10 Plus 5G sports this Gcam mod port. So, the Gcam Mod ported for these phones and you can easily download and install it on your smartphone. The latest GCam Port by Arnova8G2 works fine with the One UI 2.5 Updated Galaxy devices. Download the app here for your phone:

Note: Before Installing the new Gcam Mod ported app, make sure to delete the older version (if you’ve installed). This is not a stable version of Google Camera, so it may have some bugs. If you face any errors in the app like crash or lag, I recommend you to follow the installation process.

How to Install Google Camera on Galaxy S10 (Devices)

Note: If the App still not works after restore the settings, you can go to the System Settings > Apps > Google Camera > Force Stop & open the app again.

So, capture your life’s beautiful moments effortlessly with your Galaxy S10 (device) with the Pixel 3 Camera app.