The biggest festival begins, yes it is the season for the Football fans. No matter where you are from, but we all are supporting our favorite team. Yes, FIFA World Cup 2018 has just started, this time in Russia but don’t worry, No matter where you are in the world, think about your favorite team. I know that you are a huge fan of FIFA (Football), you just need to do one thing, cheer up your team, but the Question is how to watch the matches? In this post, I will tell 5 Best Ways to Watch Live Stream of FIFA World Cup 2018 Russia.

First of all, let me tell you about which channel you can watch all the FIFA world cup matches.

For Football fans who want to watch live from Canada can watch from these sites: CTV, TSN & RDS. And also the game will be live on “FOX, FOX Sports 1″ in English.

In the USA the FIFA World CUP 2018 will be live on “Fox Sports“ channel in English language and “Telemundo“ channel in Spanish.

In the UK the fans can watch the live stream on “BBC and ITV” on TV and also online on their sites.

South Africa – If you are in South Africa and want to watch live FIFA world cup then catch on one of these channels “SABC, Supersport, or StarTimes“.

Mexico – In Mexico you can watch FIFA world cup on “Televisa, Blue to Go, and Azteca Deportes“.

Brazil – Globosat (SporTV) helps the subscribers to enjoy every match.

Costa Rica – If you are from Costa Rica, you can watch all matches live on these networks Teletica, Sky Costa Rica, Telefonica Centro America, S.A.

Croatia – The HRT network helps you to watch the live stream of every match.

Egypt & Morocco – beIN Sports Connect network will show you the live stream of every game.

Germany – You can watch the live streaming on ARD, ZDF.

Iceland – RUV media network helps us to enjoy every game from Home.

Mexico – Mexicans can enjoy the Game on Televisa, Blue to Go, and Azteca Deportes.

Peru – DirecTV Latin America, Canal 2, Panamericana Television you can watch the match without any interruption with these media networks.

The Below 3 Methods are for Indians

1) How to watch World Cup Live on SonyLIV

In India, SONY has the permission to broadcast FIFA World Cup live. And SonyLIV is the APP from SONY itself. So it is good for Indian audience to grab popcorn, snacks and watch Live directly on Smartphone or Laptop Online via SonyLIV App and Site. Download the SonyLIV App from Play Store and App Store. Visit SonyLIV official site to watch Live Football on your PC.

This time in SonyLIV you can choose your favorite team and also you can predict the game result and win exciting prizes. You can watch Live for free but you will also see ads. To get rid of Ads you need to purchase a membership. The Live Stream is available in 4 languages Hindi, English, Bengali, and Malayalam. So this is it Just Download App and Stream on your Phone. Or just Open site on your Computer and Watch it for free.

2) How to Watch World Cup Live on AirtelTV 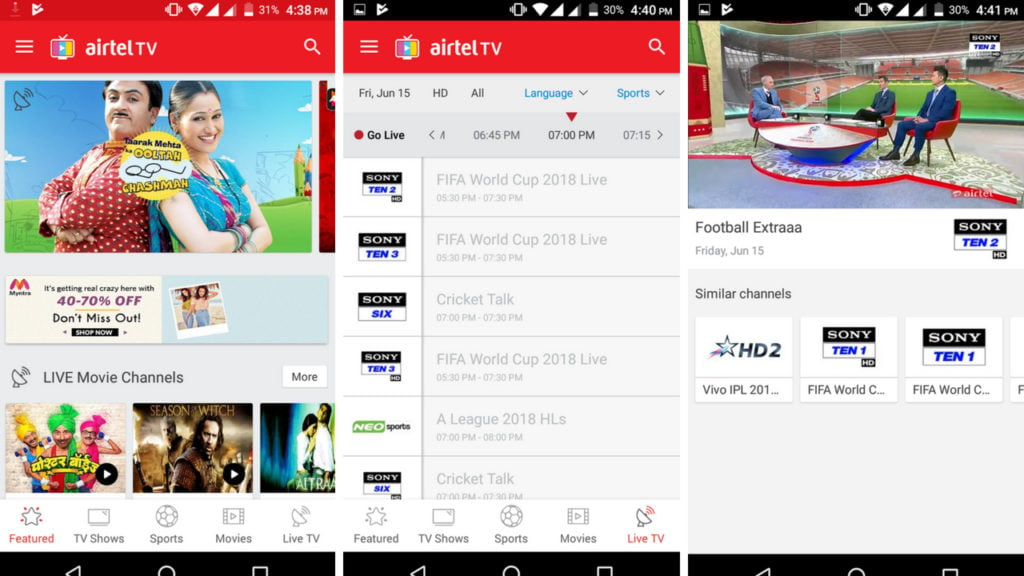 But In Airtel TV App first, you need to go to Sports section and then select any one of these channels SONY TEN 1, SONY TEN 2, SONY TEN 3 and watch World Cup Live. So Download Airtel TV App for Android and iOS and Start watching Live Matches.

3) How to Watch World Cup Live on JioTV

Similarly, like Airtel Jio is also giving chance to their customer to watch Live Football on their Smartphone. So you have to just do is Download JioTV App and Choose any of these channels SONY TEN 1, SONY TEN 2, SONY TEN 3 to watch Live Matches.

Download JioTV for Android and iOS. Then Turn On your data connection while using Jio SIM card. And then Go to Sports section in the App and select one of the SONY channels and enjoy watching Live matches on your Phone.

Well, These are the best possible ways to watch FIFA World Cup 2018 on TV, Smartphone, Laptop or any other gadget. We are trying to cover all possible countries for every Football fans. I am much excited to watch every game on SonyLIV (From India) are you? Which one is your favorite team let us know in the comment section.