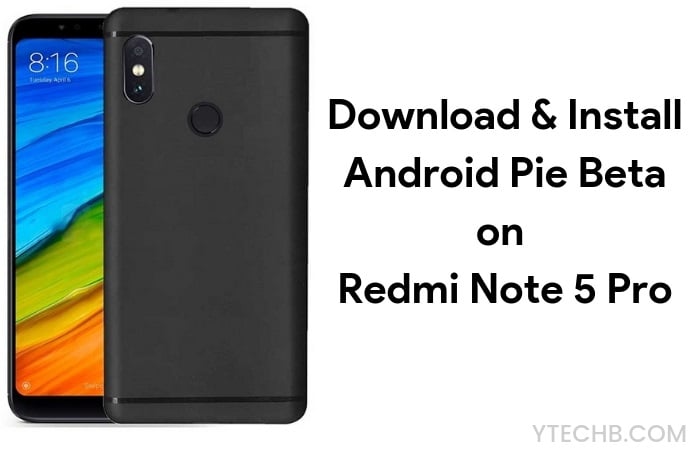 It’s a beta update and so if you are already in beta version then you will receive the OTA update. But if you didn’t get the update then use this guide to update to latest Android Pie update. Those who are in Global Stable ROM can also update to Android Pie Global Beta based on MIUI 9.3.28. So if you want to experience Android Pie on your Redmi Note 5 Pro then this guide is for you.

The firmware file based on latest Android Pie Global Beta is also available which means you can update your phone manually. The Android Pie beta update comes with lots of Android Pie and MIUI goodies. New features like customizable notification UI, Battery Indicator, Dark Mode, Adaptive Battery, Adaptive Brightness, and New gestures are included in the update. The update also brings fixes that you can read in the changelog.

If we talk about Dark Mode feature which is the favorite feature for most of the users. In this mode, various system apps converted to black theme, but some apps like File Explorer do not support this feature till now. The Android Pie beta update is a weekly update and so we can expect more fixes and features in upcoming beta updates. Below are the changelogs of the first Global Beta Android Pie update for Redmi Note 5 Pro.

The Android Pie Beta based firmware is officially available to download on MIUI website. The size of MIUI 10 version 9.3.28 firmware is around 1.7GB. There is a condition to update to Android Pie Global Beta ROM that you should be in beta ROM based on Android Oreo. So if you are in Global Stable ROM then first you have to first switch to beta ROM based on Android Oreo (version 9.3.14) and then you will be able to update to Android Pie on Redmi Note 5 Pro.

Note: If you are in Global Stable ROM then first download MIUI10 9.3.14 and install it with the procedure given below. And then follow the same procedure to update to 9.3.28.

If you are in MIUI 10 version 9.3.14 or 9.3.21 then you can try to manually search for OTA update and install the update. If this method works then it will save your time and data, and if it doesn’t work then follow the next method.

If this method doesn’t work then use the manual method to Update Redmi Note 5 Pro to Android Pie Global Beta.

You May Also Like: How to Enable Camera2 API on Redmi Note 5 Pro

This is a beta ROM generally released for testing so you may have to compromise with some bugs which will be fixed in later updates. So now you have successfully installed Android Pie on your Redmi Note 5 Pro.

I hope the guide was helpful to you. And if you face any problem while installing the ROM make sure to leave a comment and we will reply with the solution as soon as possible.

[Update: Changelog Added] Samsung Galaxy A31 finally gets One UI 3.1 based Android 11 Update