Redmi K30 is one of the most anticipated phones of the year 2019, by Xiaomi. Xiaomi’s latest flagship knocks up with a quadruple-camera setup. The camera is one of the main highlights of Redmi K30 (5G). The smartphone dons a 64MP Quad-Bayer pixel binning shooter which has an f/1.9 aperture alongside with trio of ultrawide angle lens, macro camera, and a depth sensor. And for mind-blowing shots, you can install GCam mod for Pixel 4 on your smartphone. Here you can Download Google Camera 7.2 for Redmi K30. 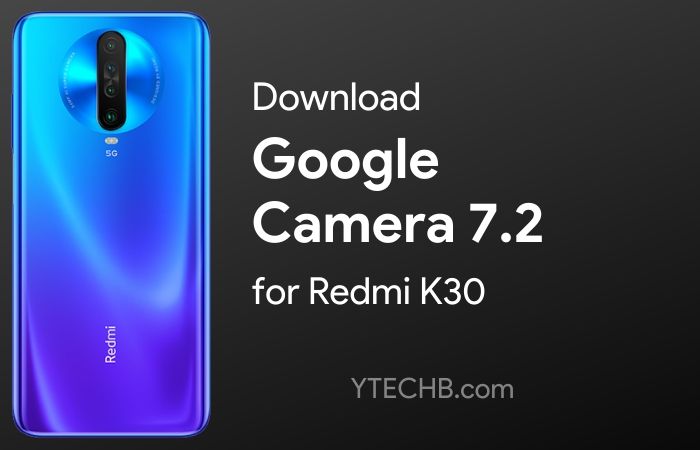 The default camera on Redmi K30 has a dedicated 64MP mode, which uses Quad-Bayer pixel binning technology to capture 64MP shots. In terms of optics and image quality, then you found decent images. Like every other Xiaomi smartphone, this one also uses Artificial Intelligence (AI). But it is not as good as the Google Camera app. You can use the GCam mod to capture blazing shots. This port also sports astrophotography mode and Night Sight mode.

You can use both Google Camera 7.2 from Pixel 4 and Google Camera 6.1 from Pixel 3 on Redmi K30. Now let’s take a limelight on the features of GCam app, It packs with features like the anticipated Astrophotography mode and Night Sight, SloMo, Portrait, Beauty Mode, HDR Enhanced, Lens Blur, PhotoSphere, Playground (AR Stickers), RAW support, Google Lens, and more. And here’s the step by step guide to download & install Google Camera 7.2 for Redmi K30.

From the past few launches, Xiaomi starts pushing their phones with great cameras. And the recently launched Redmi K30 is no exception. It bears a quadruple-camera setup on the back. Not only this, in terms of software It comes with a sport of Camera2 API which allows you to install Google Camera app without rooting your phone. All thanks to Xtrme and BSG, who have ported the GCam for Xiaomi and other phones. Below we list two different GCam mods. Here are the download links.

After installing the app, make sure to apply the below-listed recommended settings, which will make the app smoother.

There’s no need to change much in this mod, you can play with the saturation settings according to your needs.

How to Install Google Camera on Redmi K30

All done. Start capturing blazing and great photos directly from your Redmi K30.

Last year, Microsoft showcases its upcoming foldable smartphone, dubbed as Microsoft Surface Duo. The Surface Duo is one of the most anticipated devices by...
Read more

From the past couple of days, Realme teases the features of Realme X50 Pro 5G on their social media handles. Today, the company has...
Read more
iPhone

iPhones and iPads can be Jailbroken like rooting Android phones to customize it which is not possible by default. And recently the Jailbreak method...
Read more
Downloads

How to Root Samsung Galaxy A80 and Unlock Bootloader